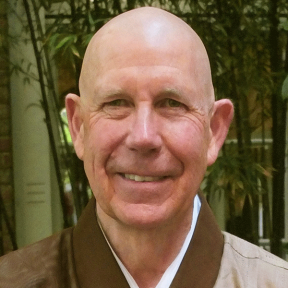 After meeting Suzuki Roshi in 1970, Rinso Ed Sattizahn lived at Tassajara from 1973 to 1977. He spent the next five years at City Center, serving as Zen Center's Vice President and President. From 1983 to 2000 Ed held various executive positions in the microcomputer software industry and developed familiarity with how the world works. In 2003, he served as Shuso (Head Student) at Green Gulch Farm, and in the same year co-founded Vimala Sangha in Mill Valley with Lew Richmond. Vimala Sangha is named after Vimalakirti, the famous householder disciple of the Buddha, and is dedicated to the practice of householder Zen in the tradition of Suzuki Roshi. Ed received Lay Entrustment in 2005, was ordained as a Zen priest in 2010, and received Dharma Transmission in 2012, all from Lew Richmond. Ed previously served on the Zen Center Board for six years (2006-2011) and as board chair for three years (2009-2011). In March 2014, Ed became Abiding Abbot at City Center, and in March 2019 stepped into the role of Central Abbot. He remains the guiding teacher at Vimala Sangha Mill Valley.