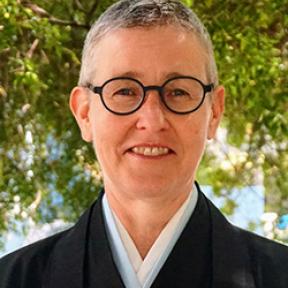 Onryu Mary Stares first arrived at Tassajara in the summer of 2000, following a period of residential practice at Gampo Abbey in Nova Scotia, Canada. After a number of years of coming and going she requested priest ordination and with that request committed to live and work in residence at San Francisco Zen Center for a number of years. Mary has lived and practiced at all three of the SFZC temples and has lived in a number of other Buddhist communities since 1999. A carpenter by trade, Mary was ordained as a Zen priest in 2010 by Arlene Lueck and Myogen Steve Stücky. Mary was Shuso (Head Student) for the Winter 2015 Practice Period at Tassajara. She most recently served as Director of City Center and is currently Tanto (Head of Practice) at City Center.