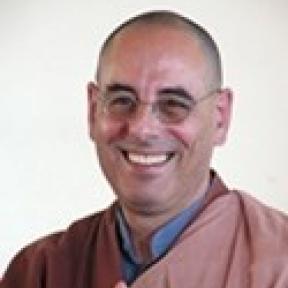 Zoketsu Norman Fischer is a writer, poet and Zen Buddhist priest. For many years he has taught at San Francisco Zen Center, where he served as co-Abbot from 1995 to 2000 and is currently a Senior Dharma Teacher. Norman is also the founder and spiritual director of the Everyday Zen Foundation, an organization dedicated to adapting Zen Buddhist teachings to Western culture.

A person of unusually wide-ranging interests, Norman’s Zen teaching is known for its eclecticism, openness, warmth, and common sense, and for his willingness to let go of everything, including Zen. His chief interests, in addition to poetry and traditional Zen and Buddhist teachings, are the adaptation of Zen meditation and understanding to the worlds of business, law, conflict resolution, interreligious dialog (especially with Jewish meditation and Catholic intermonastic dialog), care of the dying (he’s emeritus chair of the board of Zen Hospice Project), the world of technology, and anything else he can think of.

Norman has an abiding commitment to applying Zen to contemporary issues and everyday life in the world. His Zen essays on topics ranging from racism to monasticism to romance appear frequently in Tricycle, Lion’s Roar, and Buddhadharma, and have been included in annual issues of Best Buddhist Writing. In addition to his work with Zen Center and Everyday Zen, Norman continues to co-lead programs at Makor Or, the Jewish meditation center in San Francisco he founded with his friend the late Rabbi Alan Lew, and leads Jewish meditation retreats at synagogues around the country. Norman also regularly leads "Company Time" workshops for business people, Buddhist compassion-in-action to lawyers and conflict resolvers, and poetry retreats in various locations on the West Coast. He has led workshops at the Esalen Institute in California, the Open Center in New York City, and Hollyhock Farm in British Columbia, as well as at Spirit Rock Meditation Center in California, and in Canada, Mexico, and Europe. He participated with His Holiness the Dalai Lama in conferences on Buddhist Christian dialog and non-violence.

Some of Norman’s important books include Opening to You: Zen-inspired Translations of the Psalms (Viking Penguin, New York, 2002) which is used liturgically by many Christian and Jewish groups and individuals. In 2003 his book about spiritual maturity Taking Our Places: the Buddhist Path to Truly Growing Up came out, and was greeted with critical and popular acclaim. It was on the San Francisco Chronicle Best Seller list, and won an award as one of the best spiritual titles of that year. Training in Compassion: Zen Teachings on the Practice of Lojong was published by Shambhala in 2013 and has become an important resource for individuals and organizations. In 2016 The University of Alabama Press published Norman’s Experience: Thinking, Writing, Language & Religion, a collection of his work written over 30 years. His newest Dharma book The World Could Be Otherwise: Imagination and the Bodhisattva Path will be out soon.

Norman's poetry is noted for its linguistic investigation, humor, off-beat spiritual insight, and variety. Of Precisely the Point Being Made, his 1992 collection, the poet and critic Charles Bernstein wrote, "incandescently tranquil, the writing of Norman Fischer refuses to confront or confirm, preferring to give company along the way." His writing has been taught in universities, and he has often read in the academy. Audio files of his readings can be found at PennSound. Collections of Norman’s poetry from the last few years include: Untitled Series: Life As It Is; On a Train at Night; any would be if (tanka); and Magnolias All At Once.

Norman was a member of a lively group of Bay Area poets in the 70s and 80s, and participated widely in readings, publications, and poetry performances during those years. He collaborated with musicians and dancers to create pageants at Green Gulch Farm for Buddha's Birthday and Parinirvana Day (Buddha's death day) that became annual Bay Area events. He has often participated with the Beat Generation poets, especially Gary Snyder, Michael McClure, and the late Phil Whalen, close friends and mentors of his.

In addition to his guiding leadership and teaching with Everyday Zen in the Bay Area, Norman was the founding teacher and continues to participate with other Zen groups, including the Red Cedar Zen Community in Bellingham, Washington; Mountain Rain Zen Community in Vancouver, British Columbia; and Mar de Jade in Mexico. Complementing his service with Zen Hospice Project, Norman has been on the faculty of the Metta Institute, a program dedicated to training health professionals to serve as mentors for the dying.

Norman was born in a small town in Pennsylvania where he attended public schools; he went to college in upstate New York and to graduate school at the famed University of Iowa Writers’ Workshop (MFA). At the Graduate Theological Union in Berkeley, he received an MA in the history and phenomenology of religion. He was a Danforth scholar and a Woodrow Wilson scholar.

Norman lives with his wife Kathie at Muir Beach, CA, a mile-and-a-half from the Green Gulch Zen temple where he lived for many years. Their twin sons Aron and Noah live in Brooklyn, along with the family’s three grandchildren; Aron is an attorney and Noah an installation and performance artist.