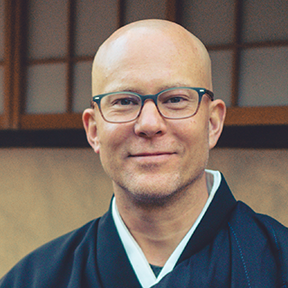 Tatsushi Tim Kroll started practicing Zen in the Suzuki Roshi lineage in Chapel Hill, NC in 2000. He received lay initation from Josho Pat Phelan in 2005 and was ordained as a priest by Ryushin Paul Haller in 2021. He has been living in residence and serving in various roles at City Center, Tassajara, and Austin Zen Center for much of the past 12 years. He was lay shuso with Paul Haller at City Center in 2015, and just recently (Fall 2021) served as Head Monk for the first Tassajara practice period to be held since the start of the pandemic. Tim was one of the founding leaders of the vibrant Young Urban Zen community, a practice group which is still thriving at City Center. He has a Masters and a national certification in Traditional Chinese Medicine, and enjoys surfing. He's currently the Shika, or Guest Manager, at Tassajara.