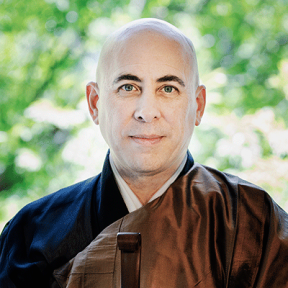 Rev. Tenzen David Zimmerman has been practicing Soto Zen since the early 90s, and has lived and practiced at San Francisco Zen Center since 1999. He was ordained as a Zen priest in the lineage of Shunryu Suzuki Roshi by Teah Strozer in 2006 and received Dharma Transmission from her in 2018. David spent eight years at Tassajara Zen Mountain Center, where he held a number of positions, including monastery director. Prior to his current role as the Abiding Abbot of City Center, David also served as the Tanto (Head of Practice), programs director, and corporate secretary. David has a Certificate of Zen Ministry through the Shogaku Zen Institute/Zen Priest Training Seminary, serves on the SFZC Promoting Inclusivity & Equity Committee, and is a co-facilitator of Queer Dharma. He regularly leads retreats, workshops, and classes at SFZC and other dharma centers, particularly on transforming depression and anxiety.

San Francisco Zen Center is pleased to announce that Tenzen David Zimmerman will transition to the position of Central Abbot in March 2023.