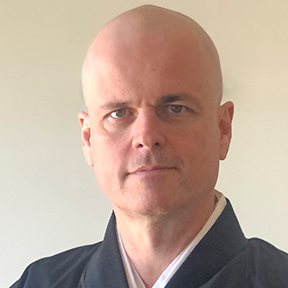 Sozan Miglioli is originally from Argentina and he began his Zen practice and received the precepts in the Deshimaru lineage. He graduated in Business Administration in Buenos Aires in 1995 and worked in marketing for international corporations before founding his advertising company in 1999, with offices in Buenos Aires, Barcelona, and Mexico City. Sozan first discovered San Francisco Zen Center in 2013 during his honeymoon and in 2014 did his first practice period at City Center. In 2015, after living for six months in Japan, Sozan and his wife Paula Pietranera became residents at San Francisco Zen Center. After becoming a resident, he lived at Tassajara for a year-and-a-half, completing three practice periods. Sozan received Priest Ordination in the Suzuki Roshi lineage in 2017. He served as shuso/head student at City Center in Fall 2020.