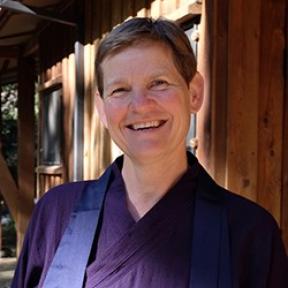 Siobhan Cassidy was born in London, England, where she lived until unexpectedly moving to San Francisco in 1990. She has lived in the Bay Area ever since and was a resident at San Francisco Zen Center from 2000 to 2008. Siobhan has participated in practice periods at City Center, Green Gulch Farm, and Tassajara, most recently in the Fall of 2015. She was Lay ordained by Setsuan Gaelyn Godwin at City Center in 2004 and has since studied with Kiku Christina Lehnherr. Siobhan is a trained mediator with over eight years experience in conflict resolution. Before returning to work at SFZC in 2016 as Programs Manager, Siobhan worked at Park Day School, a progressive, independent K-8 school in Oakland, California. Siobhan was Shuso (Head Student) for the Winter 2017 Practice Period at City Center with Ryushin Paul Haller. She lives in Oakland with her wife, Sally Chang.