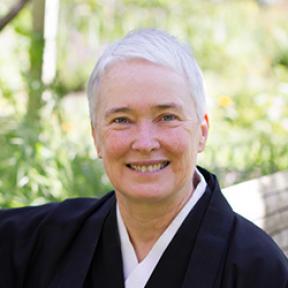 Shokuchi Deirdre Carrigan trained in Zen at San Francisco Zen Center for 20 years, including four practice periods at Tassajara Zen Mountain Center and more than a decade of residential practice at Green Gulch Farm. She was ordained a Soto Zen priest by Tenshin Roshi in 2010 and was Shuso (Head Student) in 2014. At Green Gulch, she served as Tenzo, Guest Program Manager, and Assistant to Tenshin Reb Anderson. Shokuchi studied Iyengar Yoga with Donald Moyer for two decades, and has been teaching yoga since 1988. Since 2002, she has led or co-led Zen and Yoga retreats at Tassajara Zen Mountain Center, Green Gulch Farm, The Yoga Room in Berkeley, Yogasana in Brooklyn, New York, and in Ireland. In 2017, she moved to New York City where she serves as Tanto, Head of Practice, at Brooklyn Zen Center and teaches yoga.