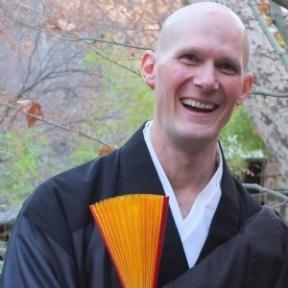 Shogen Danielson began practicing at San Francisco Zen Center in 2001. He was ordained as a Zen Priest in 2008 by Teah Strozer and was Shuso (Head Student) at Tassajara in 2013 with Kiku Christina Lehnherr. He worked with the United States Peace Corps in Africa for four and a half years during two stints as a volunteer teaching science, math, and life skills. His formal educational training includes a B.S. in Engineering Physics with a minor in Astronomy and a M.S. in Physics and Astronomy. He currently near Tassajara in Carmel Valley. Shogen loves spending time in nature: walking, hiking, backpacking and camping. And mostly he loves sharing all of this with his son and daughter.