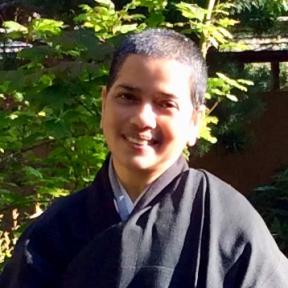 Shindo Gita Gayatri's spiritual practice began at the tender age of three when she first met her Spiritual Mentor and Guide, Guru Nitya Chaitanya Yati, who lived at Fernhill Narayana Gurukula in the Blue Mountains of South India. She studied Indian Philosophy with him. After he attained samadhi in May 1999, she wandered extensively in the Himalayas for five years. Her wanderings brought her to San Francisco Zen Center in 2004. She lived and practiced at Tassajara and City Center for several years. She was ordained a Zen priest by Ryushin Paul Haller at Tassajara in December 2009. She was shuso (head student) for the Winter 2016 Practice Period at City Center. She lives and works at Green Dragon Temple/Green Gulch Farm, studying Buddhist Psychology with Tenshin Reb Anderson.