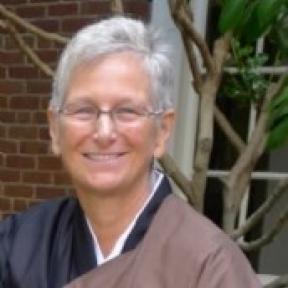 Ryotan Cynthia Kear (Horyu Ryotan - Dharma Stream Completely Overflowing) has been practicing Soto Zen Buddhism for over 30 years. She received lay ordination from Zen Center Abbot Paul Haller in 2004, and was priest ordained (2008) and given Dharma Transmission (2010) by Darlene Cohen.

In 2009 Cynthia graduated from the Shogaku Zen Institute, a three-year Zen seminary training program. Cynthia has taught Mindfulness and Multi-tasking at the University of Washington as part of a National Science Foundation-funded research project based upon Darlene’s book The One Who Is Not Busy. She leads workshops and gives Dharma talks throughout the Bay Area.

In 2004, she founded the Wild Geese Sangha, which explores daily practice in the non-monastic world. She leads the Upstairs Sangha, a group which meets bi-monthly to sit and study. Cynthia has 26 years of recovery and she co-leads a sangha for meditation and recovery. As a full-time employee, Cynthia considers the questions of practice in the “marketplace” to be of keen interest.