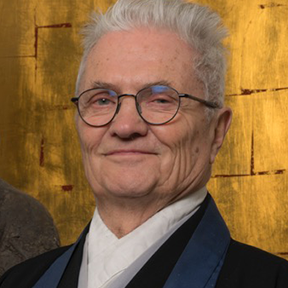 Roger Hillyard first came to Zen practice in 2007, and studied as a nonresident at City Center for four years. During that time he became the jiko (attendant) for his teacher Shosan Victoria Austin and continued in that role for six years. He received Buddha’s precepts and lay initiation from Shosan in 2009. In 2010, he became a full-time resident at City Center. Over the last ten years, he has lived and worked at Tassajara, Green Gulch, and City Center. He served on the SFZC Board and has held a variety of positions in the three temples. He is currently Shika, head of housing and guest services. He is Shuso (head student) for the fall 2021 practice period at City Center. In addition to his Zen practice, Roger has been actively involved in recovery for thirty years.