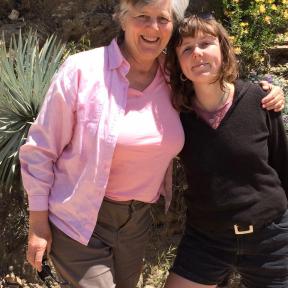 Radhika Miller studied flute, composition and voice at SFSU, and in Nice, France.  She sang in the SF Symphony Chorus which inspired a career in choral conducting. Her love of teaching and passion for music education brought her to hundreds of classrooms for  over 30 years and to cofounding a non profit multicultural arts education company, Young Imaginations. Meeting Swami Satchidananda as a teenager had a profound affect on her. She became an Integral Yoga instructor and spent many years living in his ashrams and yoga institutes, leading retreats, teaching meditation, pranayama, hatha yoga and developing her classical and improvisational flute skills. In the early 80’s she made her first  recording when Swamiji suggested she make an album of flute music for people to become peaceful and relaxed. Radhika's more than a dozen albums have soothed and inspired millions of people around the world.

“Let the harmonious tones of Radhika’s flute breeze into your heart like a gentle caress.”  Stephen Hill, Music from the Hearts of Space.