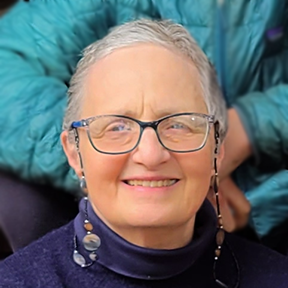 Laurie Senauke started formal Zen practice in 1980 at San Francisco Zen Center; she worked at Greens Restaurant back in the day and lived at Tassajara for three years. In 1989 she married Hozan Alan Senauke, moved to Berkeley Zen Center, and raised their two children with him there. She served as head student (shuso) at BZC in 2003 and is a Practice Leader there. In April 2018, she received priest ordination from Daito Steven Weintraub as Kosei Nyokai – Radiant Vow, Suchness Ocean. In Fall 2018, she served as shuso at Tassajara. She received Dharma Transmission from Steve in 2021. She practices hypnotherapy and has been co-leading “Write What You Don’t Know” retreats at San Francisco Zen Center. She was a contributor to Dharma Family Treasures and The Hidden Lamp: Stories from Twenty-five Centuries of Awakened Women.