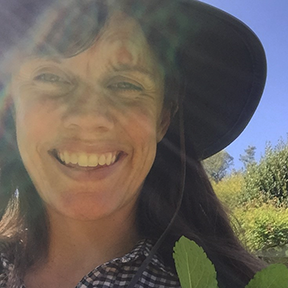 Lauren Dito-Keith was born and raised in San Rafael, CA, and lived much of her adult life in New Orleans, LA, where she worked as a yoga instructor and received a Masters in Public Health at Tulane University. She put her degree to good use with a non-profit in New Orleans called the Institute of Women and Ethnic Studies. She met her future husband Kogen Keith in New Orleans and he introduced her to Zen practice. They started a Zen sitting group together that met at a coffee shop, and then moved it to their home to allow for more sitting/meditation time. As Zen became a larger part of their lives they decided to explore the treasure of residential practice and haven't looked back.

Lauren and Kogen joined the Green Gulch sangha in 2012 as farm/garden apprentices. They lived at Tassajara for three years; their daughter Calliope was born at Jamesburg. Upon returning to Green Gulch, Lauren has mostly had work-practice positions in the hospitality-related areas. She is the rather rare extroverted Zen student who loves socializing and meeting people in joyous and sometimes loud, spirited face-to-face interactions. Lauren loves to host and meet new people and is happy to channel this energy for the benefit of all beings and the San Francisco Zen Center sangha.