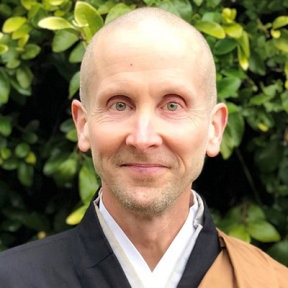 Kokyo Henkel has been practicing Zen since 1990, in residence at Tassajara Zen Mountain Center, Green Gulch Farm Zen Center, where he is currently Tanto / head of practice, No Abode Hermitage in Mill Valley, Bukkokuji Monastery in Japan, and Santa Cruz Zen Center.

He was ordained as a Zen priest in 1994 by Tenshin Anderson Roshi and received Dharma Transmission from him in 2010. Kokyo is interested in exploring how the original teachings of Buddhadharma from ancient India, China, and Japan are still very much alive and useful in present-day America to bring peace and harmony to this troubled world.