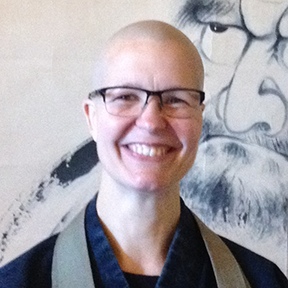 Kōgen Dai-Hō Kim Hart’s Zen journey began in South Africa in the early 1990s. She subsequently moved to London where she sat with the Deshimaru lineage, followed by a move to Italy where she practised with Maestro Fausto Taiten Guareschi at Fudenji for close to six years. She began training as a resident at the San Francisco Zen Center in 2011 and was ordained as a priest in 2016 by her teacher, Ryushin Zendo Paul Haller. She was invited to be shuso at SFZC's City Center for the Winter 2022 Practice Period.

Kim lives in San Francisco with her husband and three incredibly talented cats; she works as an artist and cleaner.