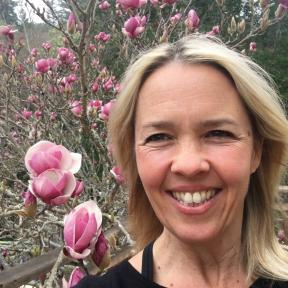 Katie was first introduced to yoga thirty years ago as a young actor, but it wasn’t until the collapse of the World Trade Towers when she was living in New York City that she turned toward the practice in earnest.  Yoga was the lifeline that changed the course of her life and led her to become a teacher.  She became certified in 2004 and has taught full time ever since.  While she’s had the privilege of studying with many wonderful teachers over the years, having been certified as an OM Yoga teacher under Cyndi Lee as well as having trained with Shiva Rea, she is most humbly grateful to and influenced by her years of study with Tony Briggs and Patricia Sullivan.  Katie’s classes are breath-based and rooted in her training of hatha, vinyasa and Iyengar yoga.  She is known for her clear and concise emphasis on alignment as well as for her heart and humor.  She also teaches kids’ yoga and in recent years has returned to acting opposite her husband, Stephen, on the Shakespearean stage in Inverness, California where they live with their ten year old son and two cats. katiejayyoga.com