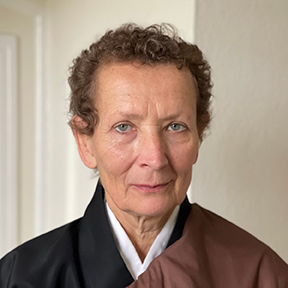 Jisan Anna Thorn practiced at all three practice centers of San Francisco Zen Center from 1995 to 2017. She was ordained by Tenshin Reb Anderson as a Soto Zen priest in 2004 and served as shuso at Tassajara with Ryushin Paul Haller in 2007. She received Dharma Transmission from Kiku Christina Lehnherr in 2017. From 2017 to 2022 she lived and practiced as a householder in Frankfurt, Germany. In 2021 she returned for the Fall Practice Period at Tassajara. She currently serves as Tanto (Head of Practice) at City Center.