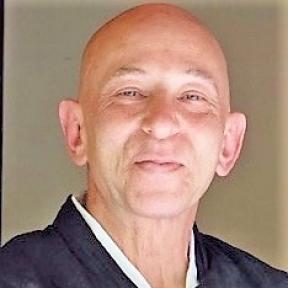 Born in Utah and raised in London, Gengyoko Tim Wicks studied fine art at San Francisco State University and received his MFA with distinction from California College of Arts and Crafts. He currently paints in San Francisco. His first practice was in the Vipassana tradition. Impressed with Mahayana Buddhism and the bodhisattva ideal, he began attending San Francisco Zen Center and became a student of Dairyu Michael Wenger, receiving from him lay initiation in 2006 and priest ordination in 2013. Beginning in 2007, he trained in the sewing of Buddha's robe with Zenkei Blanche Hartman and is now the head sewing teacher at City Center. He is currently a student of Central Abott Rinso Ed Sattizahn and served as shuso (head monk) with him both at City Center for the Fall 2016 practice period and at Tassajara Zen Mountain Center for the 2017 Winter practice period.