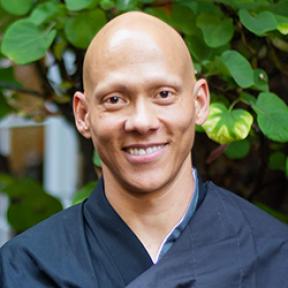 Greeting the world with a warm bow, Eli has spent the past decade living monastically as a resident of San Francisco Zen Center’s City Center and Tassajara temples. He is SFZC’s Director of Diversity, Inclusion and Belonging and, as Corporate Secretary, is an ex-officio member of the Board. In his roles he contributes to conflict resolution, diversity and inclusion work, and various areas of Human Resources.

Prior to arriving at SFZC, Eli worked in the secular world, most recently for-profit education, and as a benefit liaison for employee wellness programs. After a decade of dipping his toes into various practices, he and his wife Cat decided to leave the corporate world and deep-dive into formal residential practice.

Eli’s Zen practice is greatly informed by his main teacher Maya, his daughter, who he met in 2017, the year she was born. In 2019, Eli received priest ordination from Abbot Ed Sattizhan and was given the Dharma name So-On which means Ancestor Warmth.

In addition to his work at SFZC, Eli loves to contribute his warm service to the communities around him. He offers meditation instruction at the San Francisco county jail, teaches mindfulness to BIPOC grade school children, and is also a regular teacher for SFZC's Young Urban Zen, a group for young adults.

His heart is deeply propelled by the communities he is part of.