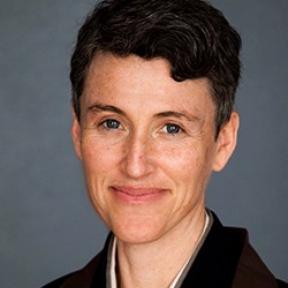 Dojin Sarah Emerson (she/her) is co-Head Priest at Stone Creek Zen Center in Graton, CA. Sarah’s formal practice in Soto Zen began in 1996, and she lived and trained at Tassajara Zen Mountain Center and other sites of the San Francisco Zen Center from 1998-2007. She received Dharma Transmission from Abbott Konjin Gaelyn Godwin of the Houston Zen Center in 2015. She has a Masters Degree in Counseling Psychology from California Institute of Integral Studies, and has worked in the fields of mental health and pastoral care with children and adults. As a priest in the U.S., Sarah is committed to centering anti-racist practice. She experiences Bodhisattva Zen practice as uniquely supportive to inquiring into, challenging, and transforming systems of oppression, particularly racial inequities and the harm they cause within convert Buddhist sanghas and in U.S. society generally. Sarah has also worked for many years in grief support—clinically, pastorally, and in community—specializing in ceremonies for child loss. She lives with her partner, Korin Charlie Pokorny (who is also a Soto Zen Buddhist priest), their children (who are her most profound and constant teachers), and numerous pets in Sonoma County, CA.