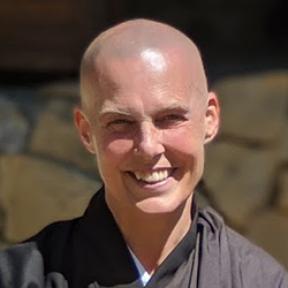 Chikudo Catherine Spaeth was ordained in the Suzuki Roshi lineage in 2013 by Susan Tokudo Jion Postal, a student of Darlene Cohen. She had been a resident attendant at Empty Hand Zen Center since 2010 and, upon Susan Postal's passing, she returned there from training at San Francisco Zen Center in 2014 to support the Empty Hand Zen Center community for one year while they sought a new teacher. Following this commitment she returned to Tassajara, becoming Ryushin Paul Haller's student, and remained at Tassajara until evacuation due to a fire in Fall 2020. During her time at Tassajara Catherine was Work Leader, Tenzo, Ino, and Shuso (head student). For many years she taught in university Literature, Comparative Studies, and Art History departments, both at the undergraduate and graduate level. She is a grateful and loving mother to her son and his wife, and a grandmother of three.