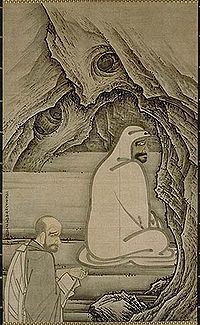 Bodhidharma is known as the founder of Ch’an (Zen) Buddhism. Little is known about him historically, but there are versions of his biography that exemplify his influence on Buddhism in Asia and now the West. He is described as a monk from India who studied with Prajnadhara. Some time after completing his studies he left India for China.

After Bodhidharma left, the Emperor brought this up to Master Chih and asked him about it. Master Chih asked, “Does your majesty know who this man is?” The Emperor said, “I don’t know.” Master Chih said, “He is the Mahasattva Avalokitesvara, transmitting the Buddha Mind Seal.” The Emperor felt regretful, so he wanted to send an emissary to go invite Bodhidharma to return. Master Chih told him, “Your majesty, don’t say that you will send someone to fetch him back. Even if everyone in the whole country were to go after him, he still wouldn’t return.”

Often portrayed as “wide-eyed,” Bodhidharma, according to the stories, was at one point so frustrated by his drowsiness that he tore off his eyelids.

- Participants are not allowed to attend:
- if they have cold or flu symptoms
- if they have been in close contact with anyone Covid positive in the last 14 days
- if they tested positive for Covid within the last 10 days. To return to the temple after a positive Covid infection, it must be at least 10 days since testing positive and the visitor must have a negative antigen test.